How do you decide on the style of business explainer video for your company? 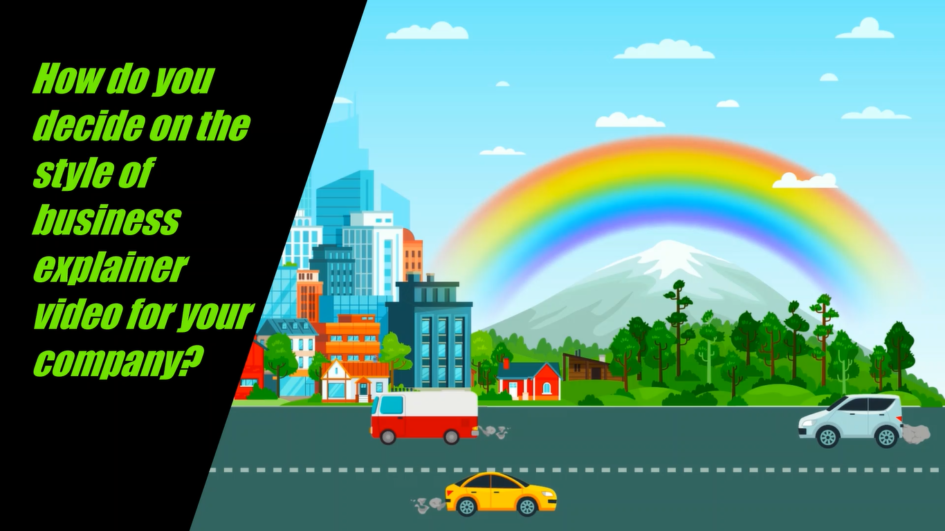 There are a variety of animation styles or types to consider for your video content and you will need to look at some examples and decide which would be a good fit. “Fit” could be the look, production values and it could be the cost of production.

The four styles of custom explainer video animation most companies use are whiteboard Video, screen casting video, 2D character plus infographics (these are the ones that look more like cartoons) and Motion graphics video. These four types are used the most because they are affordable to produce. Other animation styles such as 3D animation are used for showing product features and stock motion can be used with the combination of motion graphics to explain something like company profile video.

A “sketch” or “whiteboard video” is a custom explainer video animation with hands carrying markers for drawing images and text on a seemingly infinite whiteboard. These videos are really eye-catching, popular after about 10 years, and people are still watching them. It is ideal for start-ups and small businesses because it takes less time, efforts compared to advanced animation styles. This is why they are much more affordable.

Some people don’t like the look of chalkboard-style sketches and videos. Either they look cheap or they feel that the value of the output is not enough. Oftentimes, they’re okay, and even the best whiteboard video content created by world-class illustrators isn’t right for a particular brand. Most start-ups and small businesses will be fine with whiteboard-style videos, and these will definitely be cheap.

Cons – The production value may not be suitable for many brands.

The technology used to produce them – Adobe after effects, Video Scribe by Sparkol, and many others.

Screen casting is a digital recording of your computer screen, often containing audio descriptions. Screen cast programs usually highlight through the cursor to make it clear to your viewer where the focus of attention should be.

Screencasts are custom explainer video animations that are popular communication tools in many industries because they provide an easy way to communicate, educate and sell ideas. Screencast videos are excellent options provided by business explainer video service companies that can be sold as a series of tutorial products or uploaded as a how-to or explainer on a video platform or website It not only saves your time answering the same questions over and over but it also has been proven that most of the viewers can recall a video they have seen in recent days. It is also a big hit in the education industry. Tuning into a video demonstration gives your audience a step-by-step guide showing them what exactly needs to be done.

Cons – The production value may not be suitable for many brands.

The technology used to produce them – Adobe Captivate, Camtasia, and many others.

This style of video is used to present story element or narrative where characters are required. They are still somewhat affordable and can be quite effective as a marketing asset.

Pros – Affordable and quite effective

Cons – More suitable for presenting any story with characters, suitable for start-ups and mid-sized companies.

These videos are primarily created in Adobe After Effects. They are very popular and many are accustomed with the value of producing custom explainer video animation in the form of Motion graphics videos.

This style of video is generally more costly to produce than 2D character plus infographics because it is simply more labour intensive to make.

Cons – Expensive, software to make them is complicated. Suitable for mid-size and established brands.

3D animation is the process of creating 3D videos in a digital environment. In 3D animation, business explainer video animation companies a three-dimensional computer model is rapidly sequenced to create an illusion of lifelike movement. A 3D animated object can typically be rotated and moved digitally, like a real object. With the help of advanced animation and high quality graphics you can illustrate your story through magic of motion

Cons – More Expensive, software to make them is complicated.

Real people, real voices, effective messages. This is what live video is all about. Of the videos we watch in a day, 90% should be live. Advertisements, online training, interviews, and more. These are mostly pure live-action videos or more engaging when combined with 2D/3D animation.

With live footage, video has the ability to build relationships with viewers, and live-on-demand footage is the most effective way to tell a story and promote your brand, product, or service.

Cons – Expensive, software to make them is harder to learn. Suitable for established brands.

If you have to pick one or the other, go with the style in which you feel most comfortable. Our experience as a leading business explainer video services company using all types in actual marketing campaigns tells us that you can expect either style to be effective. That said if you have the budget, you could test all types and see which will perform best with your audience.

There has been some research that indicates that Motion graphics videos are particularly effective at capturing attention.

Our opinion is that the audience simply doesn’t know what is going to happen next with Motion graphics videos and they are paying closer attention.

Wise, a prominent writer, professor, and researcher, became interested in Motion graphics and took a quick poll to see if the motion graphics or chat video worked. He wanted to see in which one the communication of information was excellent. We have designed an investigation of similar kind for which we have created a video. One is a simple presentation of information and the other is a Motion graphics video with audio from a live video presentation. We then showed 1,000 subjects the two videos and then ran a simple test to see how well they remembered the information in the two videos.

After years of experience, we do not think it is surprising that a Motion graphics video performed better. We would still recommend that you do your own testing to find out for yourself what style of video will work best to actually improve your conversion rates.

We have done a few tests on Motion graphics VS 2D Character & Infographics and the performance was very close between the two. In the limited tests that we conducted, the Motion graphics style had a slightly higher conversion rate.

Reasonably good quality videos can now be produced by business explainer video service companies for fees most companies can easily afford. Your production costs mostly come down to how original you want your video to be. If you don’t care about originality and production values, then you can keep production costs quite low. It does take real talent to produce an original and watchable video that won’t be an embarrassment to your company that’s where your production costs go. Having a good writer for the script and a genuinely talented and creative team costs a bit more.

Regardless of what you pay or who is hired to run the project, here is an outline of the production process that can be followed. We develop this process in early 2016 and have since used it for hundreds of videos projects and less than 1% of those projects fail to be completed.

The following is an overview of the video production process.

– Kick-off meeting to discuss intent and scope of the video

Who is the video for and what will you be trying to communicate?

You will need a good script to produce a watchable video and remember the script determines how long the video will be.

Once the script is finalized, it needs to be recorded by a competent voice-over professional who has the right tone and voice style for your project.

Once the final script is ready, you will then have a meeting to decide what will appear on the screen while each section of the script is being read.

In this meeting, read out each line of script and then right out in text the storyboard notes of what should we usually appear on the screen for that line of the script. You can then have the illustrator or graphic designer produced sketches to be reviewed and approved prior to animating or simply have them go ahead and make a video to watch.

This is where the video production team of artists will create the illustrations that will be used in the video. This is the most time-intensive part of the production and is how you can end up having higher production costs, the more original illustrations and effects, the higher the cost.

Once you have something to watch, you then meet with the production team to decide if there is anything that needs to be changed or revised.

This means you can generally expect to have a video completed in 12 to 15 days. If you need the video urgently, then it can be done with the extra cost.

We all want to avoid unproductive meetings and for a video production kick off meeting we as a leading business explainer video services company have developed step by step format to compile the information needed to efficiently write and produce a video. We call it the “Questionnaire”, this gives you a logical way to begin your video production.

This “Questionnaire” for information gathering outline has made it much easier for us to get our client’s minds focused and to essentially have a good way to start and end the first meeting to work on a video.

Audience: Who is the video being produced for? You may have well-defined personas for your perfect customer which will make this part is easy or you may have to think through who your audience will be

The Problem or Opportunity: Since these are videos being produced for marketing and lead generation, we need to define what problem your product or service solves. Or in some cases, you are marketing an opportunity of some kind that would be appealing to someone’s interest in finding ways to make money.

Features and Benefits: How will your product or service solve the problem? By all means, list out all important features and what those mean to your potential customer in terms of making life better. Just be careful when writing your scripts to avoid having a video that becomes a list of stuff which will likely in both your audience and have them hi hitting the back button.

Objections/ Concerns: What objections or concerns will your audience have? You should know what these are and, if possible, address these concerns in your video. There may be other ways to approach this and we will discuss that in the section about landing pages.

Call to Action: After the video is over, what are you going to ask the watcher to do? Call, find out the form, schedule a meeting, or something else?

Custom explainer video animation have taken the marketing industry by storm. There are so many different options to choose from depending on the nature of the company, product, service and business needs, any style may be chosen. This article also elaborates the process of producing the videos systematic manner. This is ultimately a comprehensive guide on custom animated explainer videos crafted by one of the bests business explainer video service company – FlashyVideo.com